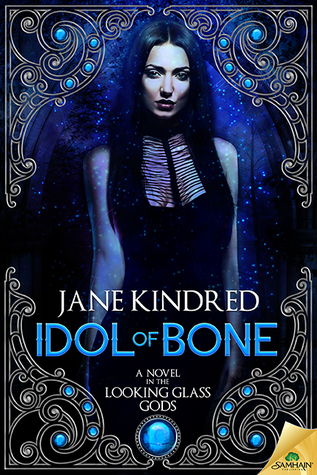 Reasons for Inclusion: Jak is agender and doesn’t use pronouns, several other characters have magically changed sex/gender in the past. There is a lesbian couple that includes a trans woman. The Meer and Delta cultures seem to correspond to something other than western/white cultures.

Idol of Bone is a dark and complicated story set in places that span from rich temples to cozy underground villages to the hopeless shadowed streets.

Ra comes in existence on a snowy night. She is welcomed by the Moundholder villagers, including Jak, who rejects gender and doesn’t use pronouns, and Ahr, who has a dark past of his own that intertwines with Ra’s former life.

Ra is one of the Meer, a race once treated as gods for their ability to conjure matter out of thin air. The Meer were exterminated in an uprising by the Deltan people, and Meerhunters still roam the country looking for remainders- looking for Ra.

Delving any further into the plot would involve spoilers, so I’ll move on to the gender diversity in the book.

Jak is agender and pansexual, and the Moundholders don’t seem to object to any of that. They might think Jak’s lack of gender is unusual, but they still respect it. The townspeople have stricter gender roles. When the lesbian couple in the book, Ume and Cree, are in public, Cree dresses as a man. Her partner, Ume, is trans, and apparently passes as a woman to most people. The people of the Delta, the society Ume and Cree fled from, have laws about gender presentation and treat any “transgression” as a crime.

Gender is treated as an important part of identity. Anyone who intentionally misgenders a character is a villain. The antagonist raises a child slave as “it”, stealing the child’s identity. Rediscovering gender is crucial to this character’s development. But gender isn’t required to be a person- Jak’s choice to go without it is just as valid.

I’m looking forward to reading the rest of the trilogy and seeing where the characters go from here.