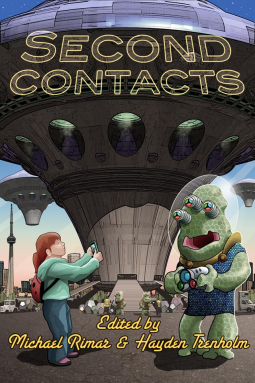 Reasons for Inclusion: Generally diverse casts, especially in terms of East Asian and Hispanic characters. Genderqueer characters (spontaneous sex-switching with or without gender-switching) featured in As Above, So Below. Pronouns zhe/zhir/zhirm featured in Grief. Autistic protagonist in Translator.

Publisher’s Summary: Second Contacts presents eighteen stories from writers in six countries (Canada, United States, England, Mexico, Israel, and the Netherlands) that answer the question: What happens after first contact? Set fifty years in the future, they explore the aftermath of alien contact, for us and for the aliens.

Stories about interspecies relations that aren’t just plain “us vs them” war are exactly the sort of thing I want to see more of in science fiction.

Second Contacts is an intriguing series of short stories about the relationships between different species. Sometimes this is humans and aliens, sometimes it’s multiple non-human species. The characters and situations are immediately interesting: aliens trading their fancy tech for our funny historical anecdotes! Plant-like aliens and their spaceship!

On the downside, the plots aren’t always as promising as the characters. A few of the stories seem to drag, and others never have that moment of clarity that explains an intentionally-confusing opening. But most of the stories were creative, memorable, and thought-provoking, showing a piece of the diversity, both human and not, that the universe offers. I’m looking forward to another collection someday!